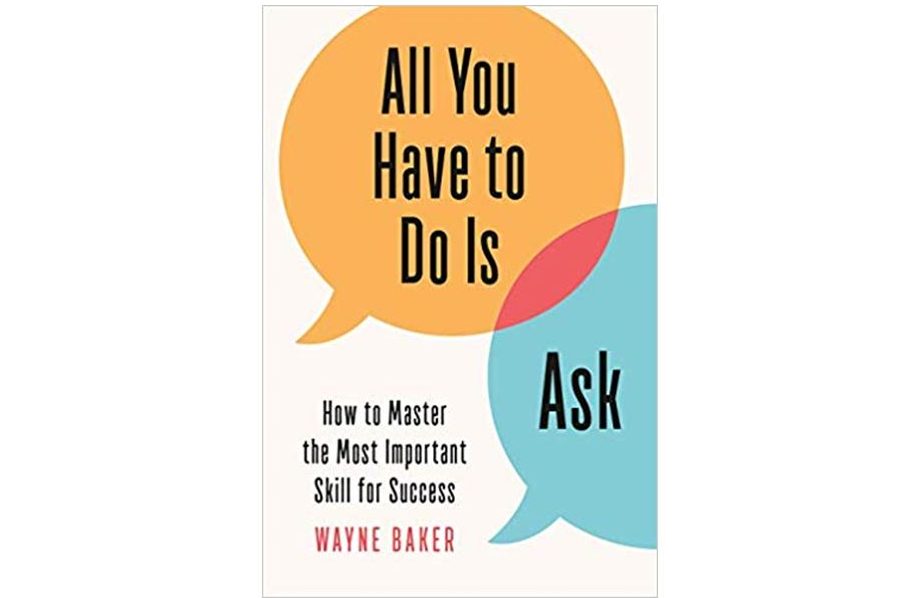 Excerpted from “All You Have To Do Is Ask” by Wayne Baker.

Copyright © 2020 by Wayne Baker. All rights reserved. No part of this excerpt may be reproduced or reprinted without permission in writing from the publisher.

Jessica was overwhelmed and didn’t know what to do. She is a generous person by nature who had volunteered, as she often does, to help a stressed-out colleague. This time, it was a recent hire at the IT firm where they both worked who was inexperienced with the company’s customer relationship management (CRM) system and had fallen behind. Jessica knew the system inside out, so she offered to take over a data-entry task on her colleague’s behalf. But what started as a simple favor for a colleague in distress soon grew into a colossal headache for Jessica.

“The additional workload didn’t seem overwhelming when I agreed to help,” Jessica told me, “but I quickly realized how time-consuming it was.” She began coming into the office early, staying late, and working through lunch to keep up with her existing job duties. She became resentful of the rest of her team for going out for lunch, or leaving work at 5:00 P.M. “I was even resentful when people stopped by my office to catch up!” she said. “A fifteen-minute conversation with a coworker meant fifteen minutes I wouldn’t be able to spend with my family that evening.”

Jessica needed some help of her own. But she never asked for it. “I assumed that my other team members had full plates also, so I continued to labor through the workload,” she explained. “I didn’t know how important it was for me to raise my hand and ask for help. I assumed that it was the responsibility of my manager or coworkers to notice how much extra work I was doing and offer to help shoulder the load.”

As Jessica’s desperation grew, she saw only one solution: quit. And that’s what she did. Looking back on her situation, she realized that the problem was never her job or her employer, it was her own failure to ask for the help she needed to get her work done. “I will never make that mistake again!” she said.

Like Jessica, so many of us are reluctant to ask for help when we are overwhelmed. When I ask audiences what it takes for them to ask for help, most people tell me they only speak up once they reach their wit’s end. “I ask for help only when I can’t figure it out for myself and I’m totally desperate,” they say.

If that statement describes you too, you aren’t alone. And yet, giving voice to our needs and requests has so many benefits. It makes us more effective at our jobs. It leads us to new job opportunities—or new talent for job openings. It helps us better adjust to new circumstances. It enhances learning and boosts creativity. It elevates team performance and improves operational efficiency. Moreover, studies show that when we do make a request, even total strangers are significantly more likely to grant it than we assume. Asking for help is often the one simple act standing between us and success. But, the thought of actually doing so can be terrifying for so many of us.

It’s critical to understand that help rarely arrives unasked for. In fact, studies show that as much as 90 percent of the help that is provided in the workplace occurs only after requests for help have been made. The explanation is simple. People can’t help you if they don’t know what you need, and they don’t know what you need until you tell them. When we don’t ask for what we need, the costs are enormous. Research shows that failure to ask for help costs Fortune 500 companies billions of dollars each year. And the costs in our own lives—at home, work, and everywhere else—are much greater than most of us realize. Not asking for help is one of the most self-limiting, self-constraining, even self– destructive decisions we can make. Without the help and assistance of others, we don’t receive the resources that we need to get our work done, to solve problems, and to fulfill our missions in the world.

When We Ask, Miracles Can Happen

Cristina is the youngest of three children. Her parents doted on her from the time she was born. So, as you can imagine, they were devastated when they discovered that something wasn’t quite right: her head wasn’t developing properly.

It turned out that the joints in her young skull had fused too early. A baby’s skull is made of five major bones held together by joints, or cranial sutures, composed of fibrous tissues. If you’ve felt a soft spot on a baby’s head, then you’ve touched a space between the bones where the sutures intersect. These flexible sutures allow a baby’s brain and head to grow. Cristina’s cranial sutures closed prematurely, preventing normal development. This rare condition is called “craniosynostosis.” Left untreated, it results in a permanently misshapen head and distorted face, which likely means a lifetime of ridicule and social isolation. And the condition carries a high risk of developmental delays, learning problems, blindness, seizures, or even death.

Specialized surgery could correct the shape of Cristina’s skull and allow her brain to grow and develop normally. But in Romania, where Cristina’s family lives, finding a specialist who could perform this rare and delicate surgery was a long shot. Without a miracle, this little girl’s future was in jeopardy.

It so happened that Cristina’s aunt, Felicia, who lives in France and works at INSEAD, one of the world’s premiere business schools, had volunteered to facilitate an activity called the “Reciprocity Ring” as part of the new-student orientation program. You’ll learn more about the Reciprocity Ring in Part II of this book, but for now, think of it as a guided group activity that allows participants to tap the collective knowledge, wisdom, and resources of a large network to obtain things they need. All incoming MBAs at INSEAD participate in the activity.

As part of her training, Felicia participated in two rounds of the Reciprocity Ring. The first round was for personal requests, the second for work-related requests. Initially, Felicia didn’t know what to ask for in the first round. But she mustered the courage to ask for the one thing that could reverse her young niece’s fate: an experienced pediatric cranial surgeon who knew how to remedy craniosynostosis.

That day, an adjunct professor of Organisational Behaviour at INSEAD named Dr. Thomas Hellwig also was being trained to run a Reciprocity Ring. At the time, Dr. Hellwig worked as a psychotherapist and pediatrician at Necker, a children’s hospital in Paris, and when he heard Felicia’s heartfelt request, he knew he had to help. So, he responded with an offer to assist, which led to a connection to Dr. Eric Arnaud, a surgeon at Necker and Marcel Sembat (another children’s hospital in the area), who was a seasoned specialist in the very procedure Cristina required.

After a flurry of email exchanges and phone calls, Cristina and her parents flew to France, where Cristina had the surgery at Marcel Sembat to correct her condition. It was a success, and today Cristina is thriving. I keep a picture of her on my desk as a testimony and a reminder of the tremendous power of asking for what we need.

I have thousands of stories like Cristina’s—perhaps not as dramatic, but just as unlikely. Or I should say seemingly unlikely. When we give ourselves permission to ask, we unlock human generosity and miracles happen.

Note from Bob:  The Scriptures say “You have not because you ask not.” James 4:2.  The answer is always “No” if you don’t ask!  You will want to get Dr. Wayne Baker’s new book “All You Have to Do Is Ask” today.  Click “HERE” to order!

Wayne Baker is Robert P. Thome Professor of Business Administration and Professor of Management & Organizations at the Ross School of Business, and Faculty Director of the Center for Positive Organizations.  He is also Professor of Sociology at the University of Michigan and Faculty Associate at the Institute for Social Research.  His work focuses on social networks, generosity, values, and positive organizational scholarship.