“Is this the best you can do?”: Henry Kissinger on work ethic

Nobody is perfect. I think it’s safe to say that at some point or another in our professional and personal lives we have for lack of a better word, “slacked off.”

We didn’t meet the boss’s expectations but instead settled for mediocrity. Maybe we under delivered our canned response, “I will give 110% in everything I do!” that we desperately repeated ad nauseam during our first job interview.

Our work may not always amount to perfection but one thing we can control is the ability to manage our attitude towards it. It’s called “work ethic.”

I’d like to share a fun little anecdote I was told while interning in Washington D.C. years ago about the importance of being confident in your work ethic featuring former Secretary of State, Henry Kissinger and his speech writer at the time, Winston Lord. (Both pictured above)

During the late sixties & early seventies, Winston Lord had been tasked with three of biggest foreign policy projects: the opening to China, bringing the Vietnam War to a close, and attempt to improve relations with the Russians.

Speech writing for Henry Kissinger and Richard Nixon fell under on of the many political duties as the Ambassador to China. Not the easiest job considering Kissinger was a speech writer himself and harsh critic.

The story goes that Lord prepares and submits a “first” draft of a speech to Kissinger one evening.

Lord replies “Henry, I thought so, but I’ll try again.”

Lord then goes back to the drawing board, tweaks, revises and resubmits another a draft a few days later.

The next day, Kissinger calls Lord into his office and again asks “Are you sure this is the best you can do?”

Lord begins to question his work and says “Well, I really thought so. I’ll try one more time.”

Believe it or not, this uncomfortable and rejecting process goes on for EIGHT times; EIGHT drafts; each time Kissinger standing firm to his original feedback of “Is this the best you can do?”

Lord returns to Kissinger’s office with the now NINTH draft and awaits his response.

Surely enough, Kissinger calls Lord in the next day and asks him the same question, “Is this the best you can do?”

Lord, now completely fed up, furiously replies “Henry! I’ve beaten my brains out – this is the ninth draft! I know it’s the best I can do; I can’t possibly improve one more word!!!”

Kissinger then looks at Lord and nonchalantly says “Well, in that case, now I’ll read it.”

While you may never encounter a boss as ruthless as Henry Kissinger, his bittersweet lesson should serve as a reminder to always challenge yourself to perform the very best work you’re capable of doing.

The next time you are preparing for a big presentation or assignment, really ask yourself “Is this the best work I can do?”

Be confident in your abilities, demand excellence of yourself and don’t ever settle for anything less than great work. 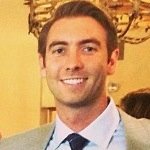 Brad Sullivan currently manages a Sales Development team at Workspot. He is an entrepreneur on the side specializing in bringing consumer products to market . He enjoys innovative technology and spending time outdoors.  You can connect with Brad on LinkedIn.