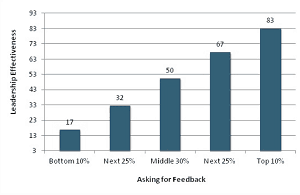 When leaders ask for feedback does it make them look weak? This is a question I hear frequently from corporate executives and entrepreneurs. It is a common misperception that seeking feedback makes a leader seem unconfident or needy. In reality, it takes courage to request feedback and the impact of asking is greater than you likely expect. In fact, our data shows an exceptionally strong correlation between asking for feedback and overall effectiveness of leaders.

Top ranked leaders (those who average a score at the 83rd percentile on leadership effectiveness) are also at the top in asking for feedback, based on research we’ve drawn from our database of 360° reviews. Is this a coincidence? I think not.

In a recent workshop a leader remarked, “I must be a great leader because I seem to get a boatload of feedback. And I don’t even ask for feedback.”

Many people can identify with this leader’s remark. I rarely find people asking for more feedback, because they generally feel overwhelmed by all the feedback they already receive. Their openness to receiving feedback and their willingness to change it is the reason that they continue to get feedback.

I know how they feel. When I get in my car with my family I never begin a trip by asking everyone in the car for feedback about the journey, but by the time we reach our destination I have usually received an abundance of unsolicited advice.

There is a significant change that occurs when people ask for feedback. When you ask others for feedback, your attitude changes. In contrast, frequently when others give us unsolicited feedback, our defenses are automatically raised. We debate, we rationalize, we react and then we finally reject the feedback. The very act of asking others for feedback puts us in a better position to listen carefully to the feedback, ask clarifying questions, and then accept the remarks.

The other thing that changes when you ask for feedback is that others change, too. People have a variety of motives for providing feedback. Some people are looking for revenge. Others are trying to appear superior, or are telling us what they think we want to hear. Some are wrong, and perhaps only a few are genuinely trying to help. But with our defenses raised, it is very difficult to sort through the various voices and motives. When a person sincerely asks another for feedback, most of the time the person providing the feedback will try very hard to give an honest and productive perspective.

A third and even more important thing happens as well: when both people have shared interest in an outcome, positive changes occur. We achieve synergy, or perhaps even “Zen.”

There is power in asking others for feedback. Asking not only empowers employees to feel their opinions matter, but it also empowers leaders to know where they need to improve.

In summary: Asking for feedback may not be your top New Year’s resolution, but it definitely deserves a place on the list.

Note from Bob:  The Best Leaders always ask “How am I doing?” and then attentively listen.    The Worst Leaders never do! 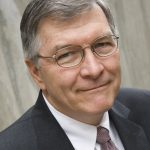 Joe Folkman is the founder of two leadership development firms, Novations and Zenger Folkman, where he developed a unique, proven method to improve organizations and develop employees by building on strengths. His specialty lies in behavioral statistics and he has built and administered more than 500,000 360-degree assessments on some 50,000 leaders across the globe.  You can connect with Joe @ Zenger Folkman.