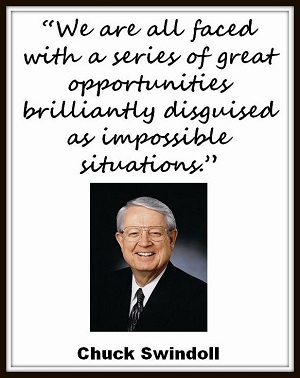 How often do you say (maybe to yourself) “That’s impossible!”?

How often do you hear “That’s impossible!”?

How do you know that?

General George S. Patton was known for his quip, “How do you know that?”

So let me ask you:  “How do you/they know that’s impossible?”

Today I want to share with you one of my most favorite questions:  (actually three versions of the same question)

Joel Barker in his book “Paradigms”:

What do I believe is impossible to do in my field but if could be done would fundamentally change my business?

You:  What’s something that would be impossible to do, but if you could do it, would dramatically increase your success?

You:  Okay.  What would make it possible?

What would be an Impossible Future or big game you are really passionate about?

How are you going to need to develop as a leader to get there?

Mark:  “What would make it possible?”  Or how can you plot a course to take you from “Impossible” to “Possible”?

Robert:  “How are you going to need to develop as a leader to get there?”  All of our real barriers are internal aren’t they?  When a leader changes what is possible changes too, doesn’t it?

As a follower of Jesus I am also frequently reminded of his words:

“With man this is impossible, but not with God; all things are possible with God.”

So what is your “Impossible Future?”

What would make it possible?