Do You Make Decisions “With” or “For” Your Staff? 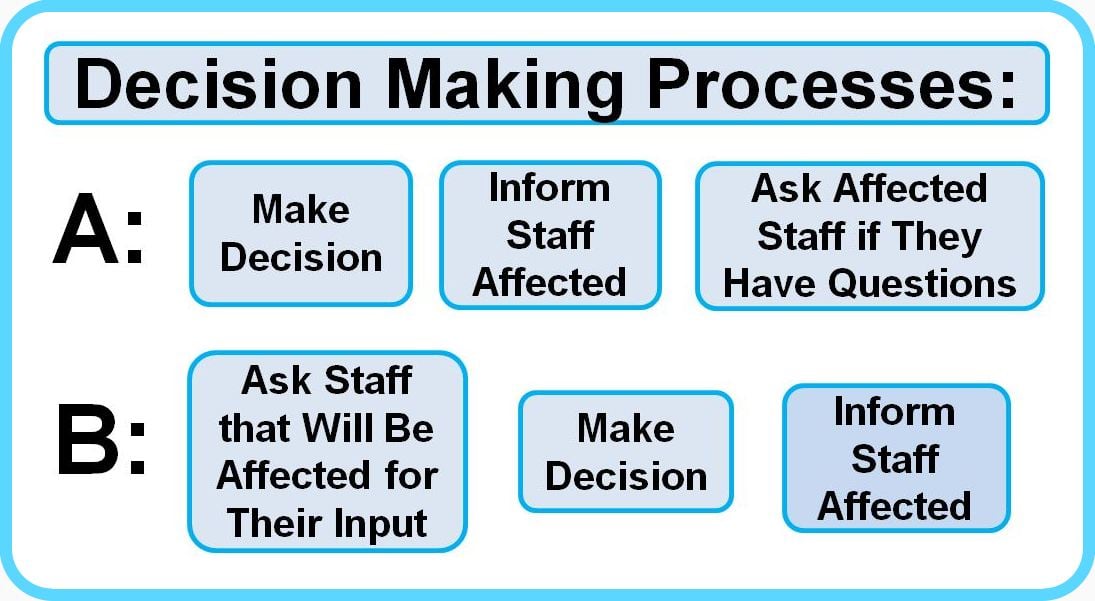 What is the “Difference” in the two “Decision Making Processes” above?  Don’t they both ask for staff input?

Is “When” you ask staff for input in the “Decision Making Process” just as important as “What” you ask?

Which process do you think will have the “Best Chance” of succeeding?

“I have interviewed hundreds of people in my thirty-plus years in business, and I have seen almost every situation imaginable. However, over lunch with Gene, who was being interviewed for a senior leadership position at Herschend Family Entertainment (where Joel previously served as President & CEO), I saw something new.

Our lunch was going very well. He was working for a larger competitor, and he clearly knew his field of expertise. Not only that, but he seemed to like our direction, growth strategy, and culture. As we talked, however, I couldn’t understand why Gene was interested in joining the HFE team. He already had a great job that paid very well, and joining us would probably require a pay cut and moving his family.

“Gene, you don’t need to sell me any more on your capabilities,” I said. “It’s clear you have the skills and the drive that we need. But why do you want to leave the company you’re with?”

He looked at me, and tears welled up in his eyes. With his voice quivering, he said, “They cut one-third of my team in a mass layoff.” And after a long pause, he continued slowly, “And they didn’t even ask my opinion. They didn’t trust me enough to ask me.” Then he was silent. He could no longer speak without crying.

Gene’s leaders lost his trust because they made a major decision without his input. He was willing to leave his company because of a lack of trust. One of the best ways a leader can demonstrate trust and respect is to listen to and involve team members in the decision that affect them.

The best decisions are always made with, not for, and showing that kind of trust is a true attribute of leading with love.”

Have you ever followed “Decision Making Process A” only to discover that when you asked the staff affected if they had any questions you were quickly confronted with a bunch of information that would have caused you to make a different decision?

Please know I have been there!  Done that!  And suffered the consequences!  How I wish I had known about “Decision Making Process B!”  The leader who thinks he/she has all the answers quits asking questions!  Big Mistake!!!

The wise leader who uses “Decision Making Process B” will benefit in three ways:

So going forward which Decision Making Process are you going to be using?  A or B?

4 thoughts on “Do You Make Decisions “With” or “For” Your Staff?”