It’s a lesson we learn early on in the classroom and take with us to the conference room: those who consistently produce the right answers are the ones who get ahead. Especially in the business world, we have long equated personal success with certitude and solutions. It’s almost a given that the people at the top of the corporate pyramid are presumed to have all the answers.

But as the pace of change accelerates and the competitive landscape grows increasingly complex, more commentators argue that it’s past time for certainty to yield to inquiry. Their logic: questions give people permission to acknowledge doubt, test hypotheses about where the world is heading, and reframe challenges. As Alan Webber puts in his 2010 book, Rules of Thumb, a simple, mind-opening question can reveal a new line of thinking —the prelude to breakthrough innovation—or kill off a bad idea before it takes hold. According to Webber’s crisp formulation, “a good question beats a good answer.”

The author and blogger Warren Berger holds that “questions may at times be more valuable to a business than answers.” In a recent article, Berger rightly claims that because they hone in on a company’s higher purpose, “mission questions”—as opposed to those often hackneyed mission statements—”are designed to keep a business focused on what matters most.” He goes on to cite the fundamental line of inquiry that we posed when we created Panera Cares—what does the world need most that we are uniquely able to provide?—as one example of a “reality check” question.

I have long believed that every innovation process starts with learning. And learning depends on observing and questioning, which in fact led to the creation of Panera itself.

In 1993, when I was the CEO of Au Bon Pain, we acquired a 19-store chain called the Saint Louis Bread Company, which we believed would help us build a gateway to the nation’s suburbs. But instead of immediately trying to scale Saint Louis Bread, we spent the next two years studying it.

Even though Au Bon Pain was doing fine, we realized we didn’t have all the answers. We resisted the instinct to swiftly “master” the new challenge of growing the Saint Louis Bread Co., since the way forward wasn’t clear to us. Instead, we gave ourselves permission to follow our curiosity. Inevitably, that led to a series of forward-leaning questions:

Such questions helped open our eyes to new, emerging patterns of consumer behavior that were all around us. Trends are a reaction, and we saw that a growing segment of consumers were pushing back against the corporate world’s commodification of America. They were gravitating to things like specialty coffee, and specialty beverages. Those trends indicated there was an opportunity in specialty food. That is, food that people were willing to go out of their way for, served in engaging environments by associates who find joy in their work. Indeed, we saw that people hungered for a break from sterile, Formica-laden fast-food chains that were little more than self-service gas stations for the human body.

Although those insights seem obvious today, they were far less clear twenty years ago. Our questions pushed us to look at the world through a different lens, which surfaced previously unseen possibilities. We began to re-imagine our company as an oasis from the hustle of everyday life; a warm, welcoming gathering place that exuded positive energy and invited guests to convene and converse. And so a first, early rendering of Panera began to take shape.

We weren’t nearly as prescient as this brief summary makes us seem. We ran down more than a few dead ends on the road to creating Panera. Nor did we seamlessly move from question to solution. There were many interim steps along the way: observing, brainstorming, testing, prototyping, iterating, re-testing, and more. But our innovation process started by asking questions.

Equally important, because we first looked for questions rather than answers, more of us owned the concept that became Panera and valued it as our own. At its core, asking questions is inherently a collaborative process.

Answers often put an end to conversations; questions ignite them.

Whether you’re leading a team, a startup, or a public company, your primary occupation must be to discover the future. That’s where value is created. A compelling and even subversive question is an effective tool for navigating uncharted terrain. In this article for the HBR Blog Network, Polly Labarre asserts, “the more disruptive the questions, the greater the chance [that your] organization will create the future, rather than be conquered by it.” Because the future is always unfolding, the imperative to lead with questions rather than answers remains.

So, what’s the question that’s creating your future and animating your company, your work, perhaps even your life? 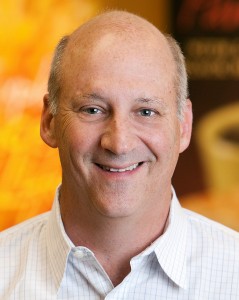 Ron Shaich – Founder, Chairman and CEO of Panera Bread. Thirty years ago, Ron Shaich set out to change the world by changing the way America eats. By founding not one, but two, successful restaurant concepts (Au Bon Pain and Panera Bread), Shaich shook up the industry by offering an antithesis to fast food – handmade, artisan food served in warm and welcoming environments by people you can trust. Today, Panera Bread serves over eight million people each week, employs over 80,000 associates and is a leader in the restaurant space. The Company is ranked number five in the Foodservice category on Fortune’s “World’s Most Admired Companies” list.

You can connect with Ron at RonShaich.com  or on LinkedIn