Excerpted with permission of the author from Chapter 19 of Asking

(Note from Bob: If you are or have ever been involved in “Fundraising” you are going to identify with the situation described below and you will immediately appreciate the wisdom of Jerold Panas, author of Asking.)

You have gone through your presentation (and as a matter of fact, it was quite good!). You established an effective foundation for the ask by probing and asking questions. You encouraged your prospect to do most of the talking.

You felt during the entire time that there was great endorsement of the organization. You were encouraged because the prospect seemed intent, raised appropriate questions, and nodded approvingly throughout.

Everything was properly in place.

You came to those simple words that transform your entire visit into an invitation for a gift: “I would like you to consider a gift of . . .” You asked for a specific amount and then you paused.

The response was not entirely surprising. “I’m not really certain, Jerry. It’s something I’ll need to think over.”

Yes, good! You could not have hoped for a better response— unless it was something like: “As a matter of fact Jerry, I’m going to give three times as much as you asked for.” (Oh sure! I’ve been waiting for that to happen.)

You now have an opportunity to learn how the prospect really feels about your program and the request. You don’t know that yet and you mustn’t go on until you do. You are ready to ask the Four Magic Questions. That’s all there are, just four.

My typical reply to the prospect’s response would be something such as this:

“Of course, Mary, you’re going to need more time to think this over. I’ve suggested a significant gift. But let me ask you…”

I will then proceed to ask Mary the Four Magic Questions to determine the reason for her hesitancy:

1. Is it the institution?

Before I leave, I have to know how she feels about these issues. And so I probe.

“As we were talking, you seemed to indicate a great interest and support for our school. Am I right about that?” (Is it the Institution?) Mary says something like: “Yes, I think it’s a wonderful school.”

(Great! I got through the first question.)

“The more we talked, the more I felt that you were keenly interested in the Library. That it’s something dear to your heart.” (Is it the project?)

“You’re absolutely right. I think the Library’s the most important thing our school could undertake now.”

(Phew. We’re through the second question. And things are going quite well. I’m reciting psalms!)

“I suggested you might want to consider a gift of $50,000. I thought that was about the amount that you’d want to give to a program like this. Am I correct about that?” (Is it the amount?)

“That sounds about right although it may be a little higher than I thought.”

(That’s okay. I consider that a positive response. I’m in the right ballpark on the amount. I’m getting close. There’s only one last question.)

“Mary, you feel so keenly about this program, perhaps it’s the timing that’s causing you some concern. If you had an additional year or two to complete your payments, would that enable you to make the $50,000 gift you seem to want to make?”

(You see what I did, and what you need to do. The initial response from Mary didn’t lead us anywhere. It was certainly better than a flat-out no— but it didn’t give any indication if there were issues still needing to be resolved. In Mary’s case, it was simply a matter of timing— and that was an easy one to adjust.)

Because repetition is good for the soul, let me emphasize again that once you’ve asked for the gift, you cannot leave the meeting, until you know:

1. How does the prospect feel about the institution?

2. Is there any possible lack of interest in the specific project. Is this a program for which the donor has heart and spirit?

3. What about the amount? Did you ask for too much? Was this far beyond anything the donor might have had in mind? You need to actually ask the question. I’ve learned that a comment such as “That’s a heck of a lot of money” isn’t a no. Just go on to the next question.

4. Is timing a factor? Would the donor be more willing to give if the timing were changed, extended, or put off for a year?

You need to know the answers to these questions. Even if I get a no, I ask the same questions. The only dumb questions are the ones you don’t ask.

I once asked Stanley Marcus how he felt when someone said no to a request of his for a gift. Stanley was CEO of famed Neiman Marcus for years and one of the greatest salesmen of the last century. He said: “I never take no for an answer. Even if the person dies, I consider it only a maybe!” 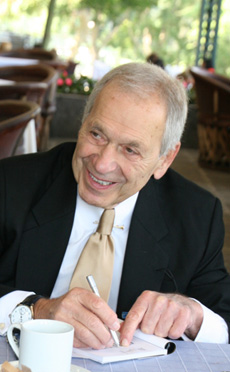 Jerold Panas is the world’s leading consultant in philanthropy and the CEO of Jerold Panas, Linzy & Partners, the largest consulting firm in the world for advising nonprofit organizations on fundraising. He can be reached at Jerold Panas

Who do you know that raises funds that would thank you if you forwarded this post to them?