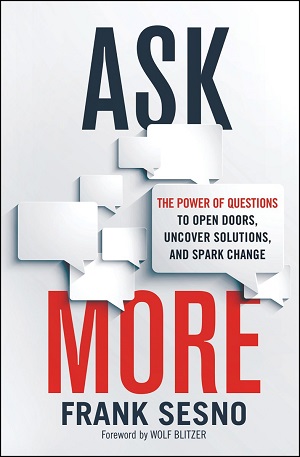 Excerpted with Permission from Chapter One of “Ask More: The Power of Questions to Open Doors, Uncover Solutions, and Spark Change” by Frank Sesno – © 2017 Frank Sesno – AMACOM

Note from Bob:  Frank Sesno’s new book “ASK MORE” was a “page-turner” for me!  It is packed with valuable insights on not just “What to Ask” but even more importantly on “How To Ask!”  Frank’s story below is just the first of many that are sure to help you grow your “Leading With Questions” Skills!

A student convinced me I should write this book.

Simone (I’ve changed her name) had arranged to interview her father—I’ll call him Morley—for an assignment I had given my Art of the Interview class. A devoted family man, Morley kept his emotions to himself and was not prone to reflection. At first he refused. “Go find someone else,” he told his daughter. But Simone persisted, and finally her father agreed to the interview, camera and all.

Simone had questions she always wanted to ask. Morley had issues he never wanted to discuss. They sat facing each other in the den, a place both of them knew well. Simone started with some innocuous open-ended questions, a classic interviewing technique. She asked about her father’s college days and how he met his wife, Simone’s mother. When Morley seemed more relaxed, Simone asked the question she’d been thinking about for a long time.

“Before I was born a child passed away,” she said. “Can you tell me what happened?” For more than twenty years, the family had faithfully commemorated the child’s birthday, but they had never really talked about what happened.

“She was born premature,” Morley said. “She lived for about a day and a half. Her lungs hadn’t fully formed. That created a series of other problems.” He paused. Then came the secret he’d never told anyone, not even his own parents.

“Your mom and I decided that we would disconnect her from life support.” His voice trailed off. He swallowed hard, trying to stay in control.

Simone kept going. “Was it a difficult decision? How did you and mom handle that?” Her father teared up. So did she.

Morley’s words came slowly. “At the time it was very hard … It was probably hardest to see some of our friends with kids at that time.” Another pause. “But those experiences shape you.” He looked at his daughter. He saw a beautiful and smart young woman—his legacy and his love. Still emotional, Morley told her she wouldn’t be alive if that terrible event had not occurred.

Simone’s head was spinning. To learn the details was difficult enough, but to see her strong, unshakable father so upset revealed a vulnerability she had never seen.

“I understand now, after what he had been through, why I meant so much to him,” she told me later. “I understand why he has always made such an effort to spend time with me, to be there for important events in my life, to tell me how proud he is of me. Now when he gives me a hug I don’t pull away as quickly. When I miss his call I make sure to try him back right away.”

Simone uncovered a deep secret, discovered a different side of her dad, and changed the way she related to her father simply because she asked. More, much more, than an oral history came from her questions.

And so I began to explore the power of questions in their different forms. I talked to dozens of people, master questioners if you will, to understand how they used questions in their lives and professions and to see what we could learn from them. The inquiry teachers in this book comprise some of the most fascinating and successful people I’ve met, some famous and some not so famous. The arc of their lives has been assisted by their ability to question the people and the world around them.

We learn, connect, observe, and invent through the questions we ask. We push boundaries and we discover secrets. We solve mysteries and we imagine new ways of doing things. We ponder our purpose and we set our sights. We hold people accountable. We live generously, to paraphrase John F. Kennedy, by asking not what others can do for us, but what we can do for them. Curiosity opens our minds and captivates our imaginations.

But the fact is, most of us don’t really understand how questions work—or how to make them work for us. In school we study math and science, literature and history. At work we learn about outcomes and metrics, profit and loss. But never do we study how to ask questions strategically, how to listen actively, or how to use questions as a powerful tool toward accomplishing what we really want to achieve.

Questions—asked the right way, under the right circumstances—can help you achieve both short-term and lifelong goals. They can open doors to discovery and success, bring you closer to a loved one, and even uncover answers to the universe’s most enduring mysteries. Insightful questions help you connect with a stranger, impress a job interviewer, or entertain at your next dinner party, and they can be the keys to a happier, more productive, and fulfilling life.

For nearly four decades it’s been my job to ask questions. From an inner-city school to a technology revolution, from the Brandenburg Gate where a president said, “Mr. Gorbachev, tear down this wall!” to the inauguration of the first African-American president, I have had the privilege of being there—watching, listening, and asking. I’ve interviewed world leaders who shaped history and heroes who dedicated themselves to the poor and the disabled. I’ve questioned avowed racists and the richest man in the world. As a journalist and interviewer, I have been enriched by these experiences and privileged to share them publicly—on CNN, NPR, and other media, and in front of live audiences. Now I teach college students how to ask to get information, to find the facts, to hold the powerful to account, and to create revealing moments for the world to see.

As my fascination with inquiry has grown, I’ve become increasingly alarmed about the questions we ask—or don’t ask—in public and daily life. Technology has revealed endless horizons, but it has also created a quick-hit, search-engine culture where a fast answer can obscure deeper inquiry. The polarization of politics, amplified by social media, has fractured civic discourse and infused it with invective instead of dialogue. The news media, reflecting and reinforcing these trends, have grown shorter and sharper. Compared to when I got into the business, television interviewers are given less time and focus more on controversy and horse race than on explanation and substance. Sincere questions too often play second fiddle to certainty, ideology, and outrage. But what if we asked more and asserted less? What would we discover? How much better would we understand the people around us? What if we went asking for solutions and posed truly creative questions that could change the world? 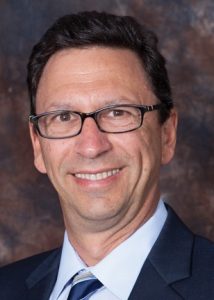 Frank Sesno is a former CNN anchor, White House correspondent, and Washington bureau chief, and is now director of the School of Media and Public Affairs at The George Washington University.  He has interviewed leaders from around the world, including five US presidents.  He lives in Washington, DC, where he asks every chance he gets.  You can purchase Frank’s book “ASK MORE” by clicking “HERE”